Written by your Editorial Team
Rate this item
(0 votes)

“Industrial scale release of oil” into our local waterway ! ;

- The search for justice and a better future.

The River Lea and surrounding reservoirs, located between Walthamstow and Tottenham in north London, a few miles north of the Olympic Park, are the largest urban wetland reserves in Europe.  This area and surrounding reservoirs, have been described as an ‘urban oasis’ for both wildlife and nature lovers. Walthamstow Wetlands has 10 reservoirs, 8 islands, 13 miles of foot and cycle path, and not to mention London’s largest heron reserve.  This oasis sits on the eastern site of Haringey, when was the last time you visited Tottenham Marshes, The Paddock Community Nature Park or Markfield?

In this, our area, there has been a major waterway pollution event over the last few weeks, did you hear about it?  The Environment Agency said then in a statement “We received notification of an incident of oil pollution on the River Lee [the name of the Lea further north] near the Middlesex Filter Beds on February 11.  So this pollution incident started mid February 2018 as a thick, dirty and “acrid” waste oil spillage or dumping and it has profoundly disturbed all the waterway engaged residents from between Stonebridge Lock, just north of Tottenham, and the bottom waterway lock of the Hertford Union Canal in Hackney Wick, both human and wild life alike.  According to the Environment Agency this was an “industrial scale release of oil” (spillage or dumping) into the drainage (sewage) network affecting over 7 kilometres of the River Lea spreading even to the Queen Elizabeth Olympic Park (Hackney) and most of the surrounding water reservoirs. With the rainfall that was received, further pockets of oil were being flushed through the drains over the weeks.

“We can’t lose sight of the fact that someone has illegally dumped tens of thousands of litres of oil somewhere further up the catchment of Pymmes Brook, and it has flowed into the River Lee from a waterway we do not manage. This is a criminal act and we want to see the perpetrators brought to justice. We are continuing to work with partners and MPs to make sure an incident of this scale does not happen again.” - The Canal & River Trust

All of the nature conscious communities surrounding Europe’s largest urban wetland reserve have been determined to contain this pollution event, which unfortunately is a regular occurrence, though fortunately not typically on this most recent industrial scale.

Our ducks and swans community members in particular, who feed and rest on both land and water, like to live on these shallow waters and wetlands.  We even have visiting species whose migration patterns bring them to Haringey. All of these birds typically have soft feathers to keep them warm and hard feathers for flying. The feathers are waterproof, so they can float whilst they sleep or feed.

Some of these birds are surface feeding, whilst some ducks and swans dive for their food. They feed on water, weeds, plants, frogs, worms and other insects.  So imagine for a moment that you’re a diving duckling or a graceful swan, taking dips under water for up to 30 seconds a go! Over the most extreme period of this pollution event hundreds of creatures have been completely covered in the oil, many have died as a result (millions if you count insects and microscopic animal beings too).  By coating the feathers, even a tiny amount of toxic waste oil not only makes it impossible for birds to fly but also destroys their natural waterproofing and insulation, thus disabling them.

The impact of the waste spillage or dumping has been debilitating.  Unnaturally such events also damages nesting grounds and other wild life habitats.  So we give thanks for the swift work of the local Swan Sanctuary and the numerous community members who have mobilised to rescue birds and other wild life.  The Environmental Agency reported that their recovery contractors and teams removed more than 80,000 litres of oily water and almost 150 industrial waste bags containing contaminated debris.  And the work is still ongoing. Much of the practical communal response has been coordinated by The Canal & River Trust, give thanks for them too.

Swans in particular like to nest near water, on reeds, sticks and water weeds. Both the female (pen) and male (cob) sit on the nest, laying up to 5 or 6 eggs, fiercely guarded by the cob.  During prime mating and nesting season for many bird and marine species, the long term consequences of the River Lea oil spillage could even affect migration patterns for birds, being a dynamic interconnected ecosystem means that there will be tragic unforeseen and unseen consequences.

Touching further on the marine life let us not forget the dramatic incedent of 2013 that saw thousands of dead fish in Hackney flow of the River Lee after a night’s heavy thunderstorms, following a two week dry spell torrential rainwater washed a lethal cocktail of pollutants into the River Lee sending oxygen levels crashing to zero.  The Environment Agency confirmed the rain had washed oils, heavy metals, dirt and dust which had built up on the roads into the Lee and its tributaries, leaving the pollutants to dissolve the little oxygen that remained in the water. Theo Thomas who runs campaign group Thames21’s Love the Lea Campaign said then that the pollution had pushed the river over the edge.  “The Lea is a river at risk, a very polluted river all year round

and on Monday it was teetering on the brink,” he said. “During hot weather water holds less oxygen anyway. But fish were not dying earlier in the week, it’s the pollution that killed the fish". That was then.

In a swift bid to halt this recent spread of the River Lea oil spill, boaters stopped their movement (water way traffic) to avoid spreading the oil, however it did spread and gather in many pockets of oily mess. Waterways in between Tottenham and Hackney Wick (Stonebridge Lock to Hertford union Canal Lock) were locked down but are now open again to free movement.

“The Environment Agency has taken the lead role in dealing with the pollution in the river, and our teams have continued to work with them. We were on-site to assist the Agency within an hour of the spill being reported and have worked continuously to support the clean-up operation since then. We have agreed response plans in place for such incidents and have worked with the Agency to action these, making sure the areas of greatest risk have been prioritised and dealt with. We have installed booms (floating security barriers for waterways), absorbent pads, restricted boat movements to best contain the oil, provided boaters with materials to help the clean-up, as well as organising a series of volunteer events. We’d like to thank all the volunteers, whose time and effort has made such a positive difference.” - The Canal & River Trust.

Initially the Environment Agency reported that it was struggling to ‘trace back the source to contain the spill’ however they did begin the recovery and investigation process within hours of the first reporting.  Regarding the root causal source and persons responsible the agency has not yet been able to give as much detail as we’d have liked given their classification of the incident as a Category 2 event under the Common Incident Classification Scheme (CICS), “significant impact or effect on the environment, people and/or property” - the agency said that “the matter is under investigation” and so they are limited in what they can say without potentially undermining the case they are developing.  We were advised that such investigations can take years ! The Futurist will observe the process, progress and outcomes carefully.

Compounding the significance of this event is the fact that The Canal & River Trust has reportedly acknowledged they ‘deal with on average six pollution events each year relating to the discharges from Pymmes Brook [Tottenham]’.  Richard Parry, CRT ‘s chief exec, commented: “It’s incredibly frustrating that it’s taken so long to find the source, and we join with those calling for action to prevent pollution like this from entering via Pymmes Brook in future.”

A local resident near to the canal said this event was “far and away the worst pollution we’ve seen”, he was shocked and very concerned.  Although the clean up is even now still ongoing, he was glad to see that the waterways were essentially returning back to normal function (for general human traffic and their generally superficial purposes), but what is the deeper legacy of this incident for the whole community, all the creatures of the enviroment?

Clearly prevention is better than cure, so The Futurist took this issue to one of Haringey’s leading environmental and recycling specialists, Robert Thairu of Elite Estates Recycling (EER), “We all have an environmental duty of care, this means that we are all responsible for any waste we produce and this applies to organisations and businesses as well, we must ensure that waste is disposed of properly. This duty of care is imposed under Section 34 of the Environmental Protection Act 1990.”  Have you ever looked into the legal duty of care that exists locally and nationally?

Robert went on to say that “Fly tipping can be intentionally or unintentionally done. According to Cambridge dictionary it is illegal to leave things that you do not want next to a road, in fields, in rivers, etc. Individuals, society and organisations need to know that leaving unwanted usable items on the pavement, even with good intentions that others can use it, is fly tipping or when there is a spillage of anything and no intentions to clear it is fly tipping; broken bag of food spilt out and left, wrappers thrown out of the car window, waste oil dumped into the communal water way to perhaps ‘save money’; not taking care of our waste properly is both highly problematic and illegal.”  Prevention is rooted in heightened consciousness of the issues, making practical solution accessible and the continual development of the communal mind. 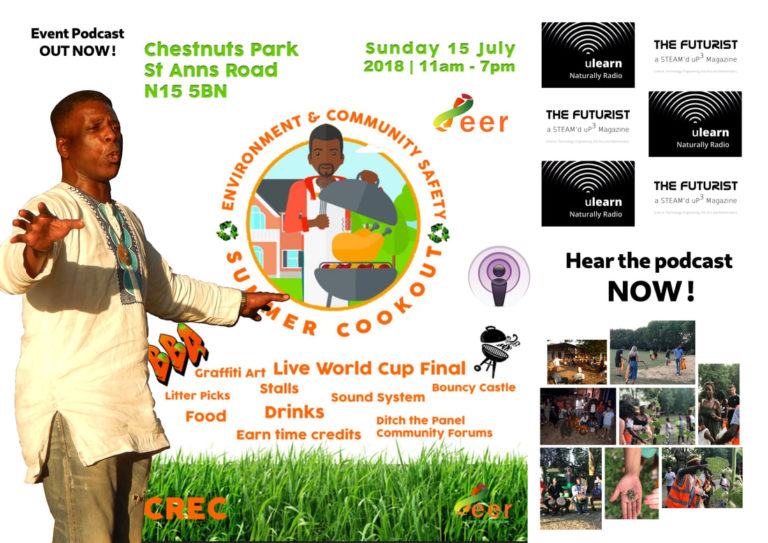 There is a need to engage the community through innovative ways that have cohesion with the current apparent financial situation in the country, which might tempt the unwise to cut corners inappropriately. This way the local authorities (including community organisations) can save on waste disposal dramas and ideally the savings can be diverted to vital services like proper educational reform, voluntary sector development, community building statutory services to mention but a few.  Definitely there is a need for better collaborations between key stakeholders, respecting each One’s most insightful inputs to succeed with robust overall goals and strategies.

Latest from your Editorial Team

More in this category: « The flaws in Attainment 8 – Part 1: Should schools be most accountable to the community or the government? StART building on Zero Waste »

Make sure you enter all the required information, indicated by an asterisk (*). HTML code is not allowed.


Register and/or login above, then click on your username link below to edit your profile.

Click on other members (if online) to request connections.

to join our new